In 2013, the eclectic post-folk duo Sylvan Esso released “Hey Mami,” a clever ode to cat-calling, and they’ve been astonishing me ever since. Their first album pushed folk music’s story telling tradition into the computer age. Each song was heartfelt, yet catchy, spurring either thought or dance depending on the situation. However, the album lacked cohesiveness, and left me wondering how the duo could build on their new sound. Their second album, aptly titled What Now, answers that question.

Before What Now, Sylvan Esso’s songs primarily looked outward at things like society, technology, and past romances. While What Now does not completely abandon the group’s knack for pointed critiques and funny anecdotes, it also provides more of a glimpse into Sylvan Esso’s world. Nowhere is that world more transparent than in “Slack Jaw.”

“Slack Jaw,” What Now’s penultimate song, is clouded by the same static that begins the album. The static returns slowly in the preceding song, as if it’s always been there, but was drowned out by the more boisterous songs. It acts as the endless, rushing thoughts in your head that seem to disappear throughout the day, but return loudly when you’re alone. As singer, Amelia Meath attempts to think critically about herself, she is accompanied by her partner Nick Sanborn’s static. She cannot think peacefully without a flurry of thoughts harmonizing along.

Through the static, Meath wonders how to be happy when all of her dreams have come true. She sings, “I got all the parts I wished for. I’ve got everything I need,” yet sadness still overtakes her. And that makes her feel kind of dumb. She’s slack jawed that through “so many rhythms and harmonies,” she could still feel unfulfilled.

“Slack Jaw” is a call to rethink happiness, or to stop pressuring people to be happy all together. People feel emptiness. Maybe if we bonded through that emptiness instead of trying to fill it, we’d all be a little more comfortable. As Sylvan Esso puts it:

It’s not like I got hurt or broken,
Or ruined on the way.
It’s an ache, and it shines through me-
A swallow in a cage.

In “Slack Jaw” Sylvan Esso let their aches shine through, and for that, they are my Sunday’s Best.

Mike Edge – Been So Long

My favorite new artist this week is Mike Edge. He’s reminiscent of Toro y Moi, but more like if Toro y Moi went on a drunken, spiraling binge, and found himself alone on an island in the Pacific. And I mean that with my utmost praise.

The second song on his new EP, “Been So Long” is fun, relaxing, and a little cheeky. The video is even more so. With each new camera shot, Mike Edge has a new drink in hand. He keeps trying to use a Hawaiian bun as a shaker, and there’s a terribly confused dog floating on an armchair in an obviously green-screened ocean. Tacky, plastic flamingos fade in and out of the video which is almost entirely tinged pink.

The song is about a breakup, so that spiraling binge I mentioned earlier may be a real possibility. At one point, Mike Edge sings, “I keep looking back, waiting to hear you call my name.” Unfortunately for Mike, I’m not even sure he and his ex are on the same continent anymore, and I doubt he knows where his phone is. I mean, he just let his dog float away in an armchair.

Hidden beneath the ridiculous images of musical baked goods and obnoxious lawn decorations is Mike Edge’s masterful artistry. He sings, writes, produces, records, mixes, and plays instruments for all his own songs. That’s the kind of craftsmanship deserving of my Sunday’s Best. 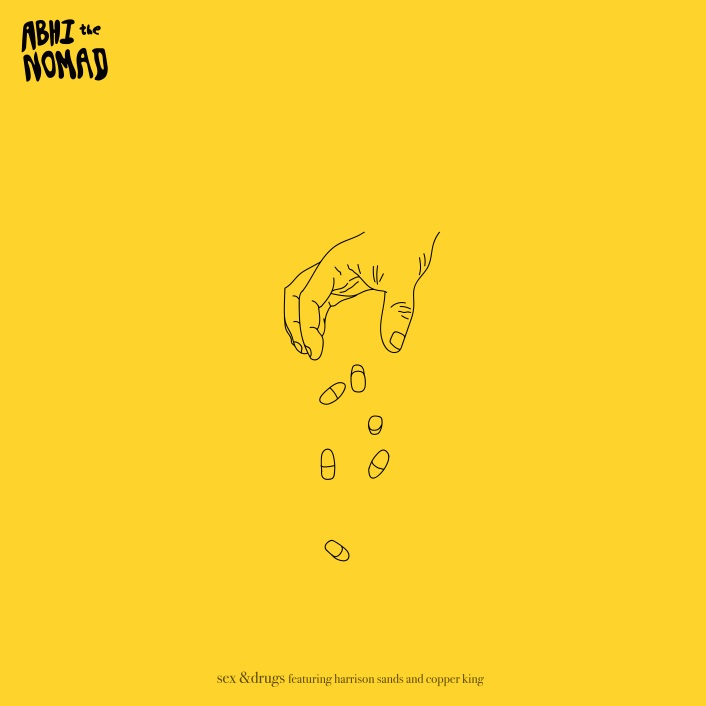 My final top-notch song this week comes from a local California Central Coast kid: Abhi the Nomad. With his new single, “Sex n’ Drugs,” Abhi latches on to the jazz and funk roots of hip-hop. Accompanied by pianos and trumpets, Abhi navigates the struggle to be cool in a time where that goal seems more elusive than ever.

On the outside, he’s “cucumber cool,” but beneath, he’s at war. One side of him sings, “I wanna be just like you. Smoke, drink, and have sex like you,” but the other side understands that being cool comes at a price. While describing the process of socially advancing, he states, “Never wanted to wash my hands from all the shakes.” With each handshake on the road to being “cool,” you lose a bit of yourself. “Sex n’ Drugs” is a reminds us of that truth.

Don’t you worry about being cool, Abhi. In the wise words of Kyle, “If a cool guy’s cool in the middle of the forest man, nobody fucking cares.”